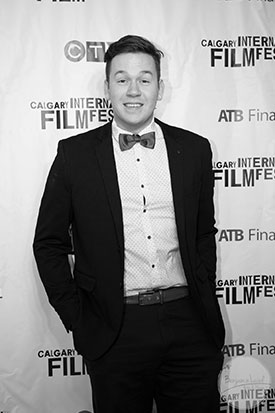 Griffin Cork is a remarkable example of industriousness merged with artistic vision and of the personal that includes the collective. His appraisers point out his exceptional abilities as an actor and a creator and his C.V. already brims with fascinating and engaging projects that ensure he will produce exciting experiences for fellow artists and audience alike.

Griffin Cork is a Calgary-born actor and producer who has been working in the film and theatre industries for over a decade. He holds a Bachelor of Fine Arts in Acting from the University of Alberta. Griffin is the co-founder and Artistic Producer of Hoodlum Theatre, a small collective based in Calgary dedicated to creating disruptive and unabashed work. He is also an Artistic Associate with Sage Theatre and is a member of the IGNITE! Festival for Emerging Artists producing team. His company Numera Films took home an AMPIA Rosie Award for Best Web Series – Fiction in 2019 for Abracadavers, and he is a core producer with Thousand Year Films.

He has worked with Theatre Calgary, Theatre Junction, The Shakespeare Company, Lunchbox Theatre, and Calgary Opera. Griffin is the former host of Studio 315 on Shaw TV and can be seen on Heartland (CBC) and Abracadavers (The Fantasy Network/Amazon Prime). He was the recipient of the Duval Lang Theatre for Young Audience Emerging Leader Award at the 2015 Betty Mitchell Awards and was named a Mayoral Arts Champion of Calgary in 2012. Griffin is committed to telling engaging, Albertan stories and strives to merge the mediums of film and theatre.